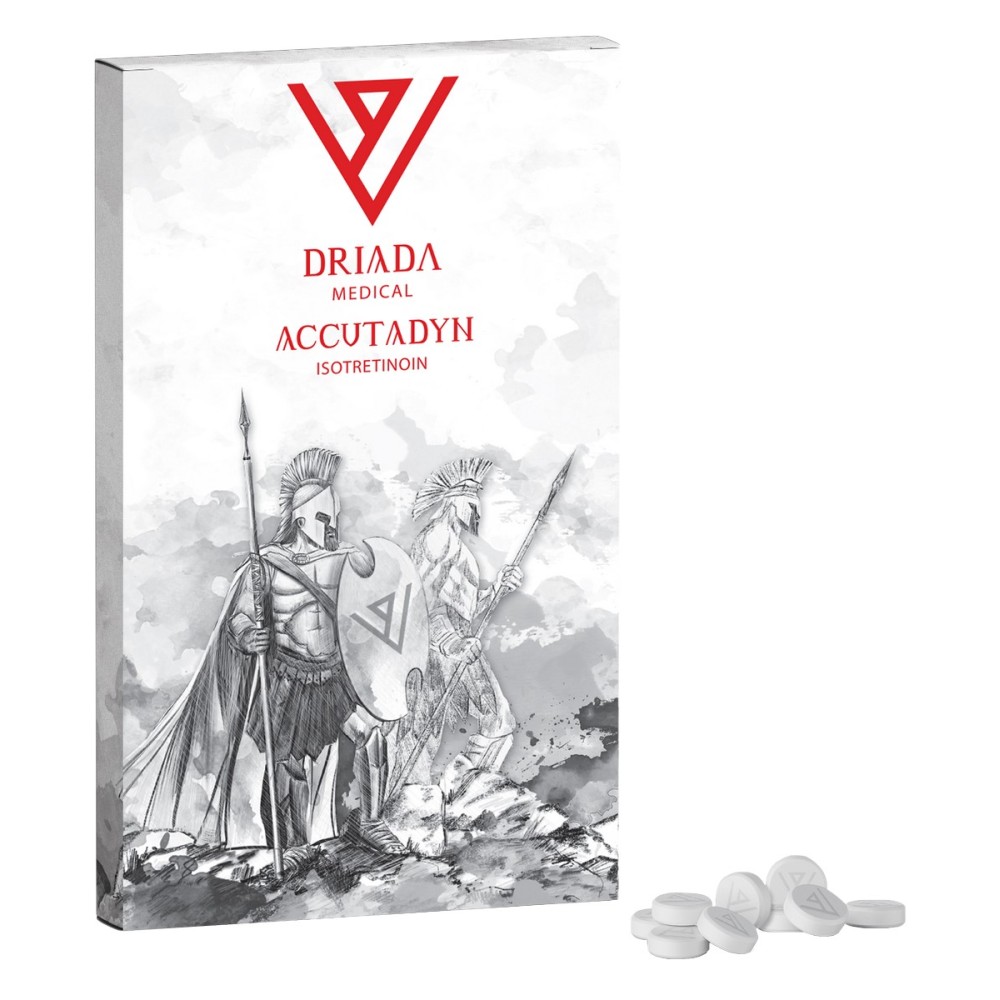 NEW
Official manufacturer's website
Accutadyn (Isotretinoin)
Driada “Accutadyn (Isotretinoin) “ is an anti-acne medication that is chemically related to retinoic acid and retinol (Vitamin A). Although its exact mode of action is unknown, this agent works by inhibiting sebaceous gland functioning, which diminishes oil production in the skin and hinders acne development. Isotretinoin is sold in many countries throughout the world and is largely regarded as one of the most effective medications for treating severe acne. Studies also support it has an excellent success rate with even some of the strongest cases of clinical acne (acne vulgaris).
Isotretinoin produces its effects by altering progress through the cell cycle, cell differentiation, survival, and apoptosis. These actions reduce sebum production, preventing the blockage of skin pores, and the growth of acne-causing bacteria. Isotretinoin and 4-oxo-isotretinoin both significantly reduce the production of sebum.
Isotretinoin induces apoptosis in sebocytes, leading to a decrease in sebum production. Isotretinoin also reduces the formation of comedones by reducing hyperkeratinization through an unknown mechanism. Isotretinoin does not directly kill bacteria but it does reduce the size of sebum ducts and makes the microenvironment less hospitable to acne causing bacteria. It may also increase immune mechanisms and alter chemotaxis of monocytes to reduce inflammation.

Given that acne is one of the most common side effects of anabolic/androgenic steroid use, isotretinoin is utilized by bodybuilders and athletes to reduce or eliminate this cosmetic issue during steroid therapy.

Dosage:
Among athletes and bodybuilders taking the drug without the oversight of a physician is often, so doses are often reduced as compared to the standard medical guidelines.

The typical method of using Isotretinoin involves taking a dosage of 0.5 to 1 mg/kg of body weight per day, so the maximum daily dosage is 100 mg for a 2201b person. Exceptional cases may require a higher dosage reaching 2mg/kg/day. The daily dose itself is divided into two equal doses, which are to be given at two separate times of the day.
Isotretinoin also should be taken with meals, not on an empty stomach, as food significantly aids in the absorption of this drug (high fat meals have the strongest benefit on bioavailability).
The typical cycle of therapy lasting 15-20 weeks is usually sufficient to clear up or at least control a patient's condition. If necessary, however, a second course may be initiated by the doctor. This must follow a break from the first course of therapy of at least 2 months.

Effects:
Treat acne by shrinking the oil glands (sebaceous glands)
Preventing clogged pores
Decreasing the growth of skin bacteria
Anti-inflammatory effect
Side effects
lsotretinoin is a powerful medication with many potential side effects.
As a result of identified potential health risks, the warnings on this product are numerous and very strong. This is especially important because any woman who potentially might become pregnant should not use the drug. Even small exposure has been linked to very serious complications with fetal development.

The FDA-approved literature on lsotretinoin has warned of depression

Contraindications:
• Isotretinoin is associated with major risks in pregnancy

How to store:
• Keep away from children
• Keep in a cool, dry place, away from direct sunlight
• Store at room temperature
• Do not use after the expiry date