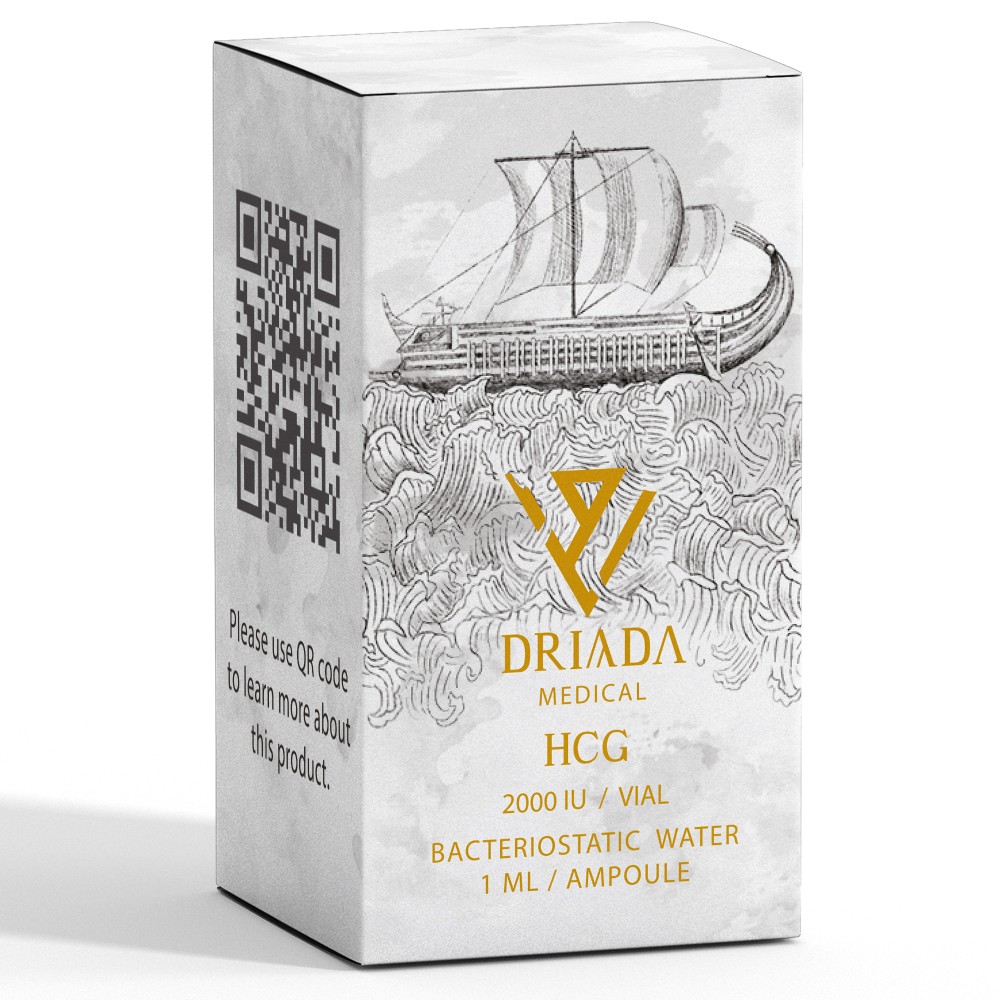 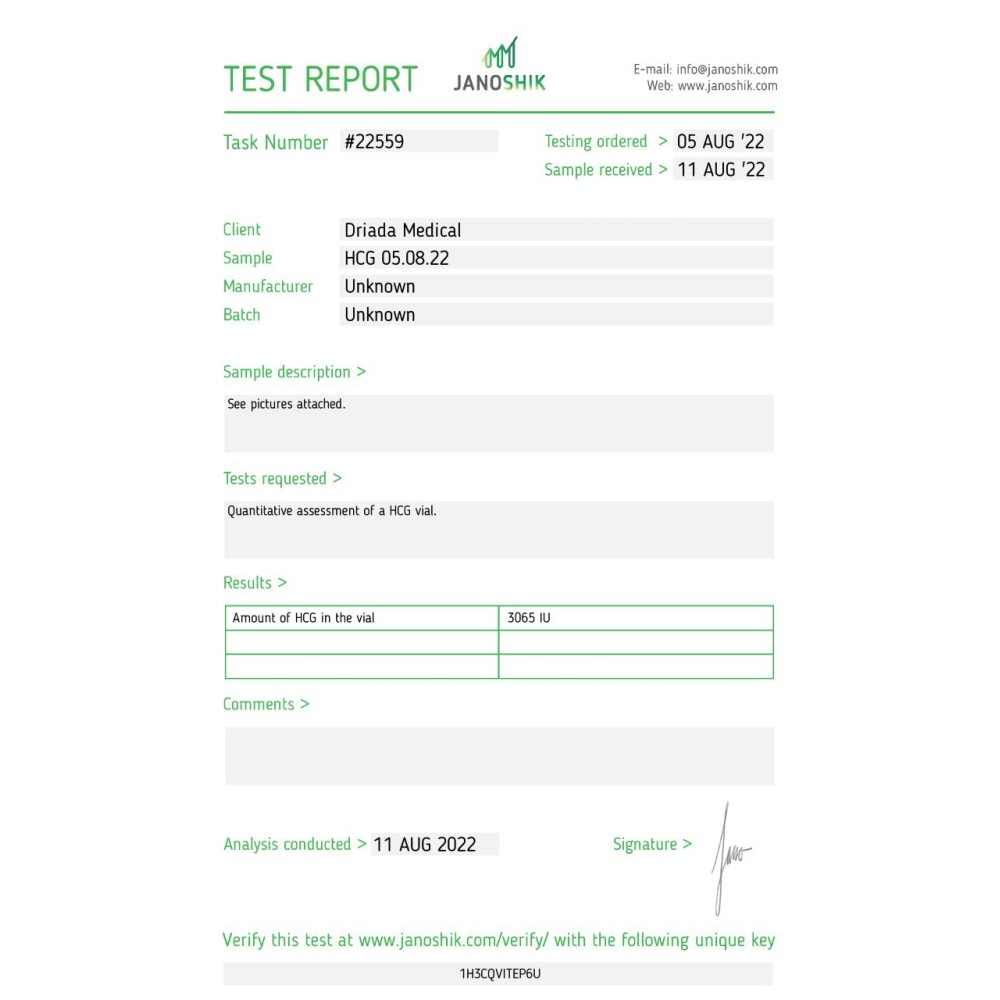 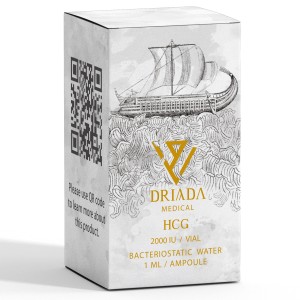 This means that HCG exerts nearly identical effects as LH in activating the production of gonadal steroid hormones to produce androgens and progesterone and in influencing the development of male secondary sex characteristics and in normal menstrual cycle for women, but it has a weak FSH activity. It sustains the corpus luteum during pregnancy.

HCG and other gonadotropins are synthesized in the body and are not xenobiotics, so allergic reactions are rare. Chorionic gonadotropin is a hormone that is produced by the placenta during pregnancy and then excreted unchanged in the urine, from where it is extracted and purified to obtain drugs.

It is FDA approved drug with proven efficiency.

There are a few major issues that require HCG as a tool. Let's consider the one – most interested for the athletes and people on TRT.

During the steroid cycle or testosterone replacement therapy(TRT), the use of exogenous testosterone suppresses the release of LH from the brain.

Exogenous Testosterone halts the Hypothalamic–pituitary–gonadal axis (HPTA) is ceased and the testicles are no longer receiving LH. This is known by most of us as simply “shutdown” or “HPTA suppression“ or Testicular Atrophy.

Men will see their testicles get smaller over time and hurt constantly along the way, sperm production is pretty much halted also. The duration for this event seems to be different in men where younger guys can seem to go longer, whereas mid to older guys see the event happening on a more accelerated scale. Scientists think that it happens to do with the number of receptors on the Leydig cells, but there is no research to prove it for sure.

Men’s scrotum will get really tight and pull up causing pain and end up looking like a 6-year-old, meanwhile, the sperm quality becomes really bad and these changes may be irreversible.

Due to this action testosterone monotherapy has been investigated as a male contraceptive [1,2,3]

In the body, the regulation of gonadotropin levels occurs by a feedback mechanism in the hypothalamus-pituitary-testes axis, so gonadotropins are produced in the pituitary gland and normally stimulate the work of the testicles, but with their deficiency, testicular atrophy occurs.

In order to escape testicular atrophy it's very important to support testicular activity during the cycle/TRT. And HCG treatment is a major tool for this.

There are dozens of HCG protocols, but these schemes are recognized as optimal since it allows you to save the function of the testicles and contributes to the most complete recovery after the AAS cycle:

·If the duration of the cycle does not exceed 5-12 weeks, and drugs are used in small\moderate doses for at least the last 3-5 weeks of the cycle, make 2 injections of gonadotropin per week, 250-500 IU, to prevent testicular atrophy.

·On long multi-month cycles, gonadotropin is used as described above continuously, 3-5 weeks on, 1-2 weeks off (it is necessary to take a break for at least 1-2 weeks in order to prevent desensitization).

·If hCG has not been used during the long n heavy cycle, then it should be included in the post-cycle therapy, but then it should be used only at the beginning of PCT. The most commonly used protocol according to William Llewellyns is supported by clinical trials [4]. hCG is recommended to be used as part of post-cycle therapy of 2000 IU, every other day for 20 days to restart the HPTA. But large doses (2000-5000 IU) are not recommended for longer than 20 days.

·Once a Week Testosterone Injection Protocols

If a man injects twice a week similar to an every 3-5 day schedule, use a more common protocol: smaller doses applied more frequently.

Inject 250IU of hCG on an EOD basis or on a Monday-Wednesday-Friday protocol.

·Cream or Gel Daily Use

If a man uses a Cream and/or Gel some of the top Testosterone Replacement Physicians, like Dr. John Crisler, recommend patients use 100iu of hCG every day.

Note: It’s not advisable to inject more than 500iu’s of hCG in any 24-hour period as it can increase intratesticular E2 which an AI is largely ineffective in controlling.

Additionally, there is a hypothesis that large amounts of hCG may desensitize the receptors on the Lydeg cells. Also, according to Michael Scally, M.D. and studies [5], testicular desensitization does not occur if the dosage does not exceed 500 IU per injection and hCG is injected less than 3 times a week.

Also, large doses cause rapid estrogen rise, so in order to avoid it, aromatase inhibitors will not work, because intratesticular aromatization will take place, so use tamoxifen or divide the weekly HCG dose into smaller parts. [6]

Unmixed / unconstituted HCG powder must be stored in the refrigerator, but it can be stored for more than a month in a dark place, below +25 degrees Celsius, without any degradation.

HCG usually comes with a saline solvent, which is only suitable for use when the HCG is being administered as a single, one-off dose (usually in fertility treatment).  If you are multi-dosing your HCG for use in TRT, the saline solvent that it comes with MUST be discarded and substituted for bacteriostatic saline. Bacteriostatic saline contains a preservative which inhibits the growth of bacteria, thereby prolonging your HCG’s shelf-life.

Once mixed / constituted, all HCG should be stored in the refrigerator and used within 30 days.  HCG is an extremely fragile substance and exposure to light and heat will cause it to degrade.

Injections could be made subcutaneously and intramuscularly with an insulin syringe.

Disinfect the rubber cap of the drug and the injection site with alcohol.

Draw the drug into a syringe and inject it slowly.

The half-life of HCG is several hours, but the effect lasts for 5-6 days reducing slowly.

In addition, GH administration increases the ovarian response to gonadotropins in hypopituitary- or growth-hormone–deficient subjects.

Yet, supplemental GH does not appear to have dramatic effects on gonadotropin action in individuals with normal pituitary function.

It was a simple and manual-like article about HCG and its necessity for everyone who uses the exogenous testosterone and its derivates.

If you want to go deeper and find out more, for example, how hCG affects mood – your and your girlfriend both, learn something new about neuroprotection, and find out why when hCG is added to the cycle, libido becomes higher even in the background of testosterone abuse and much more - wait for the next part, gentlemen!