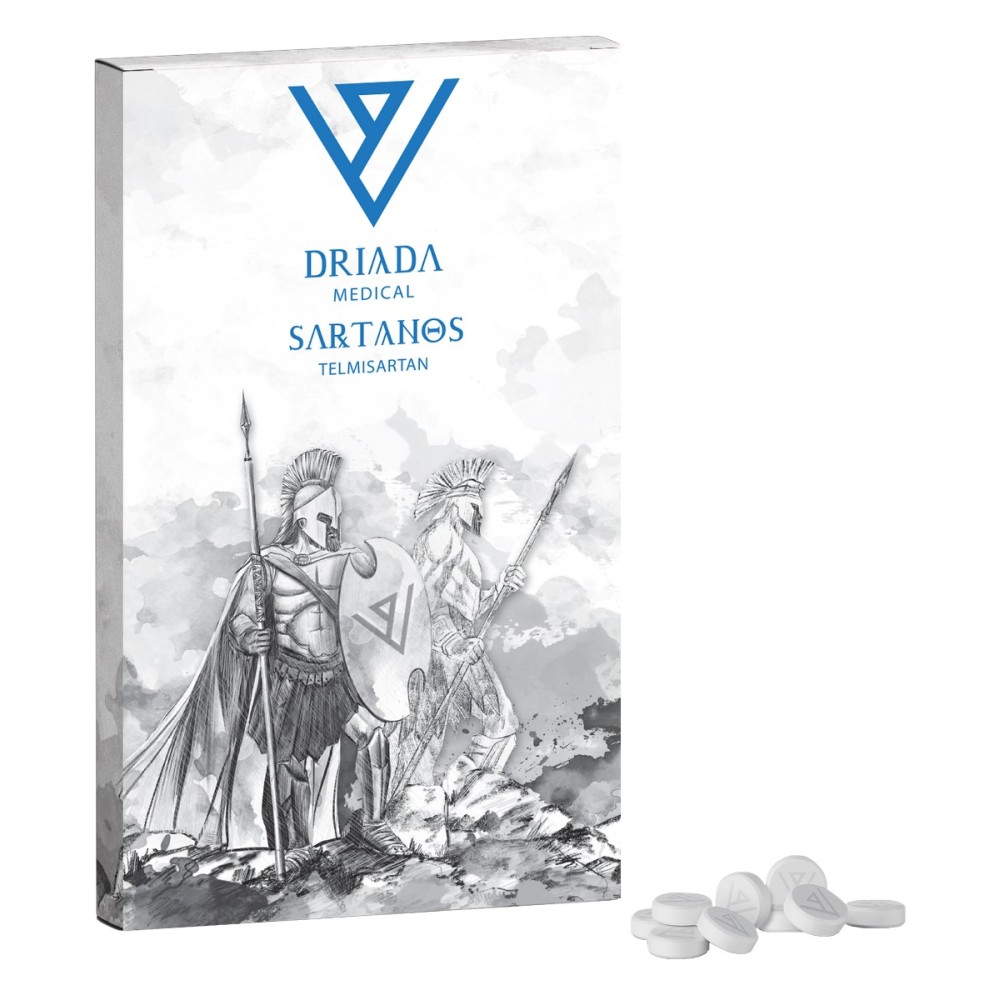 NEW
Official manufacturer's website
Sartanos 20mg (Telmisartan)
Telmisartan is the name of a drug that isn’t to common to bodybuilders, athletes or even just gym enthusiasts choosing to use performance enhancing drugs. The majority of steroid users have no idea what Telmisartan is or what it does. But they should. It could very well be one of the most important drugs available to AAS users who are concerned about their health.

Although it’s mainly known for being a prescription medication to lower BP, Telmisartan also has many, many other positive health benefits, especially for AAS users such as improving HDL cholesterol levels, metabolism, mitochondrial activity, endothelial function and cognitive function. Other advantages may include improving insulin sensitivity, decrease of risk of atherosclerosis, stroke and a potential advantage to brain health. In some instances mood or energy could be made better too.

In addition to blocking the RAS, Telmisartan also acts as a selective modulator of peroxisome proliferator-activated receptor gamma (PPAR-γ), a central regulator of insulin and glucose metabolism. It is believed that Telmisartan’s dual mode of action may provide protective benefits against the vascular and renal damage caused by diabetes and cardiovascular disease. It has also been shown to reduce left ventricular hypertrophy (LVH) and reduces visceral fat.

Following are some of the health benefit excerpts of various study findings with their relevant studies attached for reference:

Treatment of insulin resistance, diabetes and metabolic syndrome, whose activation is also correlated to anti-inflammatory and finally, anti-atherosclerotic properties.

Telmisartan is antihypertensive agent, angiotensin II receptor antagonist (type AT1). It has a very high affinity for this receptor subtype. Telmisartan displaces angiotensin II from its association with AT1 receptors. Affinity for other subtypes of AT receptors was not found. The functional significance of other subtypes of receptors and the effect of elevated (as a result of the appointment of telmisartan) levels of angiotensin II on them is not known.
The Renin-Angiotensin-Aldosterone System (RAAS), is in charge of regulating blood pressure and fluid balance. It regulates its response to things such as angiotensin, a naturally occurring chemical that narrows your blood vessels and can increase blood pressure. One specific type of angiotensin – specifically, angiotensin 2 – is of importance to us here, because the use of anabolic steroids raises levels of this specific type of hormone.
Telmisartan reduces plasma aldosterone levels, but does not inhibit plasma renin, does not block ion channels, does not inhibit ACE (kinase II), which also destroys bradykinin. Therefore, there are no side effects associated with bradykinin.
Blockade of the renin-angiotensin system with ACE inhibitors, which inhibit the biosynthesis of angiotensin II from angiotensin I, is widely used in the treatment of hypertension. ACE inhibitors also inhibit the degradation of bradykinin, a reaction also catalyzed by ACE. Because telmisartan does not inhibit ACE (kininase II), it does not affect the response to bradykinin. Whether this difference has clinical relevance is not yet known. Telmisartan does not bind to or block other hormone receptors or ion channels known to be important in cardiovascular regulation. Blockade of the angiotensin II receptor inhibits the negative regulatory feedback of angiotensin II on renin secretion, but the resulting increased plasma renin activity and angiotensin II circulating levels do not overcome the effect of telmisartan on blood pressure.
Telmisartan reduces left ventricular hypertrophy (LVH) and reduces visceral fat. This should be of particular interest to athletes. LVH is an adaptive response to intense weight training whose effects are amplified by steroid use. LVH is generally benign in highly trained athletes but it is associated with decreased cardiac function, particularly as an athlete age.  Reductions in visceral fat are also associated with decreased cardiovascular risk.
The use of telmisartan is a scientifically proven harm-reduction strategy that reduces overall mortality as well as the risks of cardiovascular diseases in particular.
Pharmacokinetics
When taken orally, it is rapidly absorbed from the gastrointestinal tract. Bioavailability is 50%. When taken simultaneously with food, the decrease in AUC ranges from 6% (at a dose of 40 mg) to 19% (at a dose of 160 mg). 3 hours after ingestion, plasma concentration levels off, regardless of whether it is taken with food or on an empty stomach. Communication with plasma proteins is 99.5%. The average values of apparent Vd in the equilibrium stage are 500 l. Metabolized by conjugation with glucuronic acid. Metabolites are pharmacologically inactive.
T1 / 2 - more than 20 hours. Excreted through the intestines unchanged. Cumulative excretion by the kidneys is less than 1%. Total plasma clearance - 1000 ml / min (renal blood flow - 1500 ml / min).
Dosage
For adults, the daily dose is 20-40 mg (1 time / day). In some patients, the hypotensive effect can be achieved at a dose of 20 mg / day. If necessary, the dose can be increased to 80 mg / day.
Patients with impaired renal function, as well as elderly patients, dose adjustment is not required.
For patients with impaired liver function, recommended daily dose is 40 mg.
Dosages for athletes are the same - the use of a daily once-per-day dosage of 20 to 40mg to reduce the risk of atherosclerosis, cardiovascular disease and/or stroke in steroid-using bodybuilders with prehypertension. This can also lead to improvements in HDL cholesterol levels, insulin sensitivity, mitochondrial activity, endothelial function and cognitive function.
Drug profile
• Half-life: 24 hours
• Frequency of intake – 1-2 times a day
• Hepatotoxic rate:  None
Effects
• Arterial hypertension
• Reduce cardiovascular risk
• Improvements in HDL cholesterol levels
• Insulin sensitivity
• Increase mitochondrial activity
• Endothelial function
• Cognitive function.
• Reduces left ventricular hypertrophy (LVH)
• Reduces visceral fat
• Reduces water retention
• Decrease adrenaline production that causes vasoconstriction of blood vessels
Side effects
For Telmisartan side effects are rare and may include:
• Changes in vision
• Dizziness, lightheadedness, or fainting
• Fast heartbeat
• Large hives
• Painful urination or changes in urinary frequency
• Swelling in the hands, lower legs, and feet
Contraindications
• Hypotension
• Pregnancy
When pregnancy is detected, Telmisartan tablets should be discontinued as soon as possible.
How to store
• Keep away from children
• Store at 25°C (77°F); excursions permitted to 15°-30°C (59°-86°F)
• Do not use after the expiry date
Based on 0 reviews. - Write a review
31.00 €
1 or more 31.00 €
Add to cart
Ask question
Add to Wish List Compare this Product