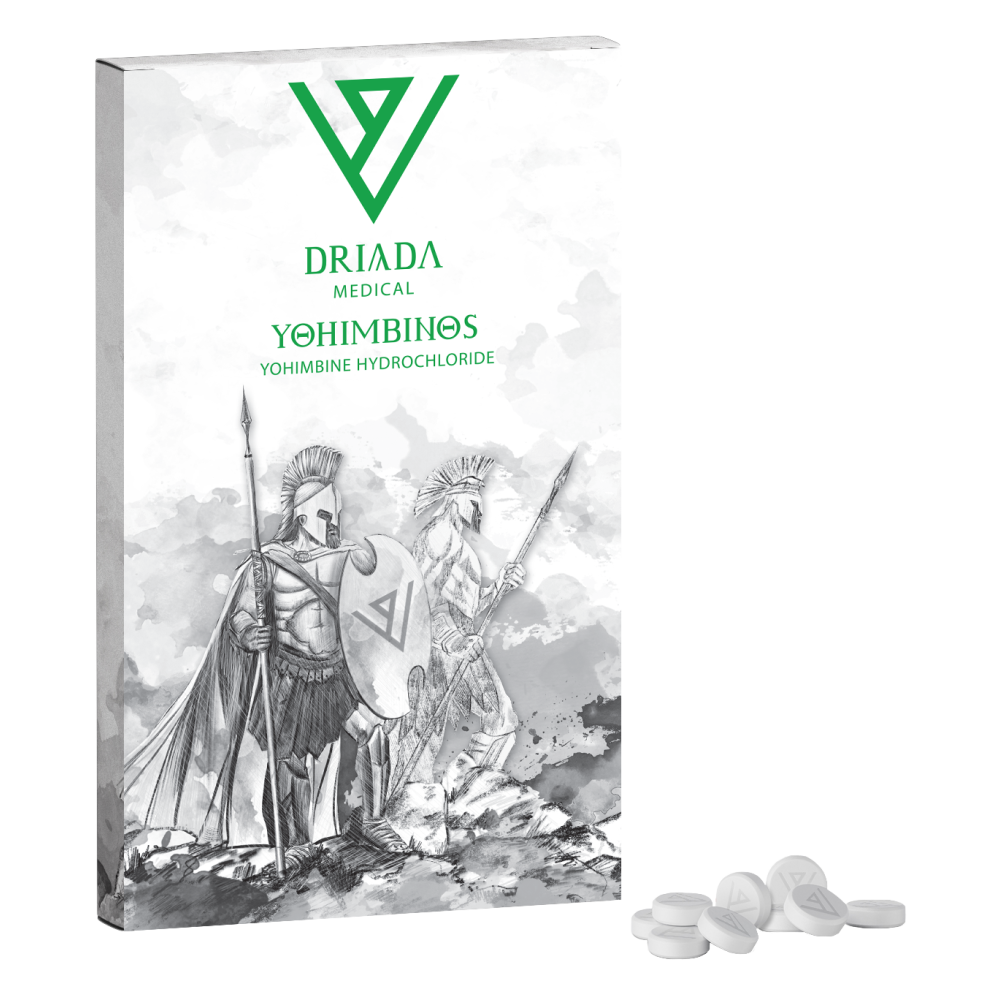 NEW
Official manufacturer's website
Yohimbinos (Yohimbine Hydrochloride)
Driada "Yohimbinos (Yohimbine Hydrochloride)" is an indolalkylamine alkaloid is used as a fat burner, mydriatic and in the treatment of erectile disfunction.
This compound belongs to the class of alkaloid with alpha-2-adrenergic blocking activity, it blocks presynaptic alpha-2 adrenergic receptors. Its action on peripheral blood vessels resembles that of reserpine, though it is weaker and of short duration. Yohimbine's peripheral autonomic nervous system effect is to increase parasympathetic (cholinergic) and decrease sympathetic (adrenergic) activity. It is to be noted that in male sexual performance, erection is linked to cholinergic activity and to alpha-2 adrenergic blockade which may theoretically result in increased penile inflow, decreased penile outflow, or both. Yohimbine exerts a stimulating action on the mood and may increase anxiety. Such actions have not been adequately studied or related to dosage although they appear to require high doses of the drug. Yohimbine has a mild anti-diuretic action, probably via stimulation of hypothalmic center and release of posterior pituitary hormone. Reportedly Yohimbine exerts no significant influence on cardiac stimulation and other effects mediated by (beta)-adrenergic receptors. Its effect on blood pressure, if any, would be to lower it; however, no adequate studies are at hand to quantitate this effect in terms of Yohimbine dosage.

Yohimbine is a pre-synaptic alpha 2-adrenergic blocking agent. The exact mechanism for its use in impotence has not been fully elucidated. However, yohimbine may exert its beneficial effect on erectile ability through blockade of central alpha 2-adrenergic receptors producing an increase in sympathetic drive secondary to an increase in norepinephrine release and in the firing rate of cells in the brain noradrenergic nuclei. Yohimbine-mediated norepinephrine release at the level of the corporeal tissues may also be involved. In addition, beneficial effects may involve other neurotransmitters such as dopamine and serotonin and cholinergic receptors.

Yohimbine often used during cutting cycles and because of its alpha 2-adrenergic blocking properties it has a pronounced lipolytic effect:
When beta receptors are excited by adrenaline(or its mimetics), fat is destroyed, and when alpha receptors are excited, the opposite effect is observed: inhibition of adrenaline release and accumulation of fat in fat depots. By blocking alpha receptors, yohimbine allows fat to break down freely with the release of energy.

As a fat burner often used as an addition to clenbuterol due to its pronounced synergic effects.

There are additional reasons that dictate the need to block alpha2-adrenergic receptors. This allows you to reduce blood pressure, which often increases with the use of fat burners, as well as increase blood flow in adipose tissue, thereby accelerating the transport of fatty acids to the site of destruction. The difficulty of getting rid of fat in some places is explained precisely by the large number of alpha2-adrenergic receptors, so yohimbine can help to accurately remove fat deposits in the most problematic places.

Dosage:
A safe dose of yohimbine is up to 20 mg.
Usually, the dose selection starts from 2.5-5 mg.

Effects:
•    Has an aphrodisiac activity
•    Stimulates libido and enhance sexual arousal
•    Increases the blood supply to the cavernous bodies
•    Improves the psycho-emotional background and sexual sensations, helps to eliminate feelings of discomfort, insecurity, stiffness, and fear during the sex
•    Has an antidiuretic effect
•    Mobilizes fatty acids from subcutaneous adipose tissue so may be used as a fat burner
•    Increases motor activity and physical performance
•    In small doses increases blood pressure (due to stimulation of the vasomotor center), in large doses, it reduces blood pressure (due to a-adrenergic blocking action).

It weakens the action of serotonin, the excess content of which in the body causes depression, and nervousness.

Side effects:
•    Fluctuations in blood pressure and tachycardia (due to a stimulating effect on the heart)
•    Agitation
•    Insomnia or drowsiness
•    Headache
•    Dizziness
•    Redness of the skin (due to vasodilation)

Contraindications:
The risk of side effects increases when combined with other stimulants (complex supplements).

How to store:
• Keep away from children
• Keep in a cool, dry place, away from direct sunlight
• Store at room temperature
• Do not use after the expiry date